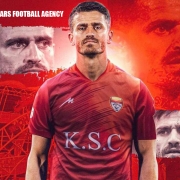 Earlier, a photo that showed Ghafouri privately training with a jersey of Foolad had gone viral on social media but the contract has been just inked by the sides after what Iranian media called “long” negotiations

Hamid Reza Garshasbi, director general of Foolad, said the talks were prolonged due to financial issues, rejecting rumors that claimed some authorities were hindering the contract

The right-back parted ways with Esteghlal weeks ago after six years. His decision came as the club’s officials did not contact him for the extension of the contract this summer

Want to join the discussion?
Feel free to contribute!

Pars Football Transfer Agency under the management of Amir Houshang Saadati with years of experience in transferring Iranian and foreign players to European leagues and leagues of Arab countries around Iran will make the best choice for talented players. Brilliant record and cooperation with the best Iranian players in transferring them to European countries has created an uncompetitive resume for this transfer agency.